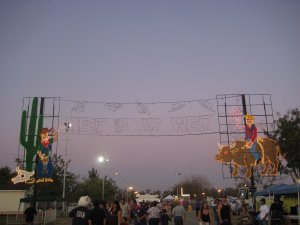 There’s hardly anything more American than the Kern County Fair. You might think your county likes it’s fair, but that’s because you have not been to this particular fair. Don’t get me wrong, Michiganders know how to throw a fair. We’ve got the animals and the fried food and the country music and the borderline unsafe carnival rides. It’s not the content of the Kern County Fair that makes it all that different from any other county’s fair, it’s the enthusiasm of the fairgoers.

We went to the fair during it’s second week on a Wednesday night. That place was jam-packed full of people sporting cowboy gear, forking out $30 for an all-you-can-ride carnival wristband, lining up to pay and see a 1,000 lb. pig. And you could tell this wasn’t just any old family outing. People were dressed in the part, acting like kids in a playground (granted, some of them were actual children on actual playground toys), drinking libations and singing aloud.

My particular crew included only one Kern County native, and you could tell that she had a special twinkle about her that the rest of us lacked. We had one Swede, on his first trip to an American fair. I think he summed up an outsider’s likely feelings when, upon entering the jam-packed fair amidst of sea of cowboy hats, a seemingly endless row of ‘exotic’ food vendors and more blinking lights and dinging bells than ever seen on Christmas, he said “What is this exactly that we are doing?” No one could actually explain.

After some spirits, gut-busting treats and a walk through booths of vendors peddling fair souvenirs we headed to the rides. I’m not sure if you know me, but I am here to tell you now (in case we are ever in a situation where there are rides) that I don’t enjoy rides. I will go on rides sheerly under the force of peer pressure, and I will close my eyes throughout the experience repeating over and over to myself “Statistically speaking, this will only last 90 more seconds.” There was a time, during my young, naive days when I thought I might be the type of person who liked rides. But as I got older my tolerance for violent jerking and speedy elevation changes became less and less. I guess it’s one of the cruel results of aging which, by the way, completely explains the Gravitron Incident of 1991 when my dad braved the Gravitron at my insistence and proceeded to toss his cookies about 10 seconds after we exited the ride. (pictured below: an example of a ride I didn’t go on, but I did hold the extra purses, cameras and cell phones…everyone has a role to play) 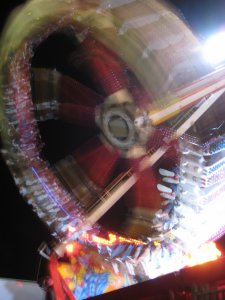 There is, however, one glowing exception to my distaste for ride. The Tilt-A-Whirl. I.Love.It. The tilting, the whirling. All of it. My dad taught me the subtleties of centrifugal force on that ride (only a few rides before the Gravitron Incident circa 1991) and to this day I appoint myself the lean-coach of all Tilt-A-Whirl carriages in which I am a passenger. “Leeeeeeean to the RIGHT!” “Leeeeeeeean to the LEFT!” I had the luck to ride with David and the Swede, meaning the weight in our carriage was greater than all those puny children who were trying to whirl the way we could. Nice try, losers.

What is more American than an array of deep fried candy bars?

The animals are my favorite part…everyone else went along with it only because I was a sport about waiting while they were on the rides. 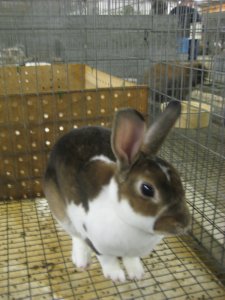 3 thoughts on “Say Yes To The Tilt-A-Whirl”