Maybe someday I’ll tell you the complexity of how I really feel about minor pro hockey culture, this lifestyle or the sport in general. But right now the Condors are in round one of the Kelly Cup Playoffs. And it’s not complicated to explain how I feel about that. I LOVE PLAYOFFS.

First of all, in a technical sense, playoffs are the payoff for all the hard work done during the season. I’m sure someone else could give you a more numerically based rationale as to why this season that hard work was so much harder, but I’ll break it down to you in laymen’s terms. Making the playoffs is always a battle, but this year it was more of an epic struggle. If we think back to what might be called the “depths of despair” portion of the season (I have a flair for the dramatic) in December and January, it seemed highly unlikely that we would be enjoying the ups and downs of the post-season the way we are now. At some point, for some reason, this team turned that frown upside down and started winning. And it was awesome at first because it’s always nice to mix some winning in with your losing. And then it was awesome because we had given ourselves a chance at playoffs. And then it was awesome because, barring some freakish event, we had somehow clinched a spot! And here we are today, waiting anxiously for a round one victory in game six. The season that took so long to get right just must go on.

Secondly, playoff hockey is more exciting. During the regular season I very seldom feel a real sense of urgency. Sure, winning is better, losing isn’t good. But there are 72 games, so losing or winning one doesn’t make or break the season. In playoffs the opposite is true. It feels like everything is at stake during every game. You’ve never seen a row of player’s significant others so riveted by every tiny movement of the puck. We’re up, we’re down, we’re screaming hastily altered versions of profanity to keep things G-Rated. Or PG-13 at least. We yell out things like “KILL HIM” or “GET IT OUT” or “WHAT WERE YOU THINKING” or my personal favorite “WHY!? WHY ARE YOU DOING THIS TO ME?” when the ref gives us penalties. Our regular-season chitter chatter is contained between whistles or during period breaks because we are truly focused on the hockey game at hand.

And more than the added excitement of the play itself, I love the spirit of playoffs. It gives me an excuse to act like a crazy fan rather than a sarcastic yet supportive spouse. We spent hours, and I really do mean hours as in 5 or 6, making sweet playoff t-shirts which we wear every game without washing because we’re suddenly very superstitious. We bring the same rally towels from game three to each game because we believe the light-up fans from game four may have been the reason we lost. We have a mantra, which I cannot share with you because of aforementioned superstition, that really works. All the rituals that the players have seem so annoying during the regular-season, but during the post-season I take them on myself.

And finally, I love the theatrics of the playoffs. It’s more than a sporting event, it’s like a soap opera. When you play the same team so many times consecutively with so much on the line there is bound to be bad blood between them. And in the stands we have our own storyline. According to our own standards, we have chosen the villains and they always seem to live up to their role. For instance, but keeping confidentiality in mind, this round they are called “Lamilton” and “Chewy” and maybe “Shrimpright.” My rational mind knows that they are probably perfectly nice guys who would be our friends if they were playing on our team. But they aren’t on our team, and they must pay! I hiss and boo and scream words of warning to the worst of the bad guys, and yes I know they can’t hear me. It’s a plot where good takes on evil with no gray area. If the good guys win, it’s because they deserved it more. If they don’t, it’s because of some injustice done to them.

Cross your fingers for the Good Guys tomorrow night. 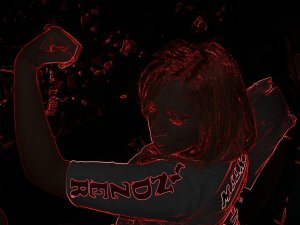 2 thoughts on “Game Face On: Playoffs Round One”