While I’m still not ready to discuss the hard fought yet abrupt end to the season and the sadly quick departure of this seasons’ teammates/friends, I am happy to think back on what made this season unique from those that came before it. Of course each year brings new people, and for us a new physical place, new coaches, a different outlook on life. But in a more literal sense, each season has it’s own sound.
Last season Grosch instituted Snipe Dog, which led them to, for no apparent reason, shout out “B-O-N-K Snipe dog” (or any other last name, really) and then die laughing. No one knows what that meant exactly. Liebs was the expert at talking like a Drunken Walrus, which may or may not been an impersonation of their coach, with popular phrases like “Ok, Mr. Smart Head” and “You don’t gonna do that.”
In Tilburg Burgy used batter chatter to get the guys pumped up in the dressing room, and consequently the term “honey now” became commonplace. When something went really well, we could all exclaim “honey now!” Eventually, it took the form of a verb and it could be said that you really honey-now’d someone. In it’s final stage, as we all became more familiar with the Netherlands and the language, “honey now” became “honig nu”, a literal and therefore nonsensical translation into Dutch. We used it liberally and shouted it while biking drunkenly through the streets after they won the championship.
But this year things were taken to a whole new level. I can handle a catch phrase, even a catch phrase that turns from a declarative exclamation to a verb and/or adjective. But this year, an entire language was developed, possibly what the cavemen would have sounded like if they had spoken English and learned that English from Yoda. It goes something like this: Say I made a delicious lasagna for dinner. After the guys devoured the dinner, the appropriate Condors-ese reply would be “better dinner.” Or perhaps “more stuffed am I.” If it’s exceedingly hot one day, that would be described by saying simply “hotter” or “more sun.” If we were caught out in a rainstorm someone would probably say “wetter I am.”
Seriously. Entire conversations are carried out this way. And as sad as I was when the season ended and our friends started to disperse, I thought the one silver lining would be that Dave’s communication skills would return to normal. But I was wrong. There are a few lifers and a few injured stragglers from the team who are still here in Bakersfield, and they are keeping this language alive. I find myself slipping into the pattern, saying things like simply “dumber” or “more hungry I am” and I just want to slap myself across the face.
———————————————————————–

Another aspect of this season that made it unique was the unusually large number of significant others on the team. There were 10 full-time ladies attached to the players, and at least 4 more who came to visit from Canada, the Eastern U.S. and even Germany throughout the season. And while stereotypes dictate that we are all mindless, uneducated, bimbos who alternate between cat-fighting and naked pillow-fighting, I actually beg to differ. Of course in a group of 10 the differences are many, but that just made us a more interesting group as a whole. Let me break it down for you in simple terms:

Ten women…
From three countries (Canada, U.S. and Japan).
Counting among us 6 blondes.
Three of whom are Bakersfield natives.
Proudly claiming one retired professional hockey player in the group.
With an average age of 24.3 and an estimated average height of 5’4”
With nine dogs between us (Stan, Missy, Trixie, Kai, Bingo, Hardie, Falcor, Enid and Cali).
With the one and only Miss Bakersfield among us.
Carrying two fetuses, currently known as Clem and Arturo, soon to be children.
Four of whom are married.
With a general propensity for unpractical footwear. 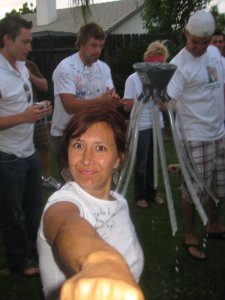