Sometimes, after a decade of being in a relationship with Dave, after 7 years of living together and almost 5 years of marriage, it’s hard to remember the me that I was before all that. Of course there is the young me with my family, and the awkward me in middle school, and the sadly still awkward me in high school. But the me right before I met Dave. The me I wanted to be when I left home for the first time. Maybe turning 30 is making me feel reflective and nostalgic?

When I look back fondly on the best times of my life, many of them are with Dave and since the baby. But some, quite a few actually, went down in the halls of my most likely asbestos contaminated dorm my freshman year of college. Ahhhh those were the days.

Gather round children, let me tell you a story.

Many moons ago, I left my childhood home. Several hundred miles away from my place of comfort I moved in with a stranger and lived without cellphones, without Facebook, with an email system that looked like it was created the same year as Atari.  We had desktop computers or even *GASP* went to the computer lab when we needed to use the internet or write a paper. There was no DVR. Things were rough. Luckily for us we had no idea what we were missing and we lived in a co-ed hall so we were distracted from the primitive nature of our existence.

It went down mostly like this. My parents dropped me off at the University of Michigan. My roommate had a Hello Kitty bedspread, so I had that going for me. That night I met Erinn and Molly, two doors down. We drank some cheap beers and learned what Napster was.  The next day I met Jen and Kristy, my next door neighbors. We drank cheap bear and I learned what a Queen’s accent sounds like (note: NOT like Fran Drescher). I hung with Lynn and Angela and Liz and they dubbed me an honorary Asian student. In the following weeks I met Caleb and Joey and Scott and we all became friends, kids playing like adults, living in a firetrap, eating Lucky Charms at every meal because our moms weren’t there to tell us not to. (Seriously, every. single. meal. I was in heaven.) 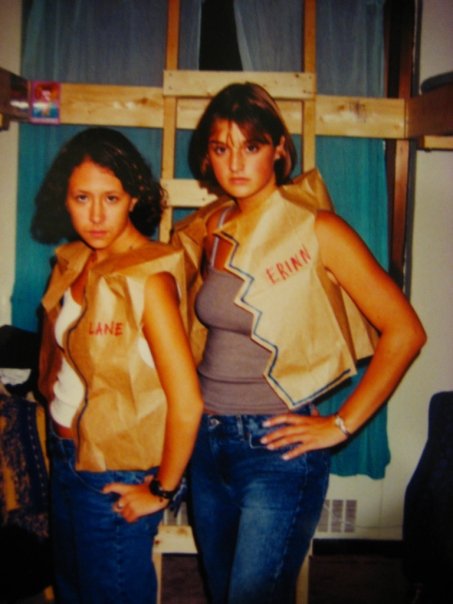 After the 45 seconds of homesickness I felt while my parents rode the elevator back down to the lobby after dropping me off, I proceeded to have one of the most amazing and defining years of my life. Every Monday night we sat together on an old couch under a lofted bed and ate a pint of Ben and Jerry’s, preferably Phish Food. That’s a pint EACH. We walked together to our classes, shared communal bathrooms, studied as hard as we partied (ok, almost as hard), called each other on landlines to make plans, and spent Friday and Saturday nights finding parties where we were influential enough to manipulate the music selection (“What’s up San Antonio, what’s up? What’s up San Antonio, what’s up?”). That year I ruined Smirnoff Raspberry for myself for the rest of eternity.

I learned a lot, grew a lot, explored every inch of a beautiful campus that will forever have a place in my heart. I ate new things (hello falafel!) and drank too much and went on dates and became passionate about politics yet avoided growing out my armpit hair. But mostly I made four friends, lifelong friends, the kind you can’t shake even when you try your hardest by making some poor choices and waiting too long to apologize. We laughed together, studied together, cried together, ate dinner around a table more than your average American family.

It’s been 12 years since we met, and in the interim we’ve scattered. Across oceans and state lines we started careers, met husbands, had babies, lived adventurous lives. We lost touch as a group but held together individual ties and then we all grew up a little and came back together and remembered what we were missing.