Time to practice what I preach. All this talk about running and motivating and going for it is just talk until the toes hit the road. 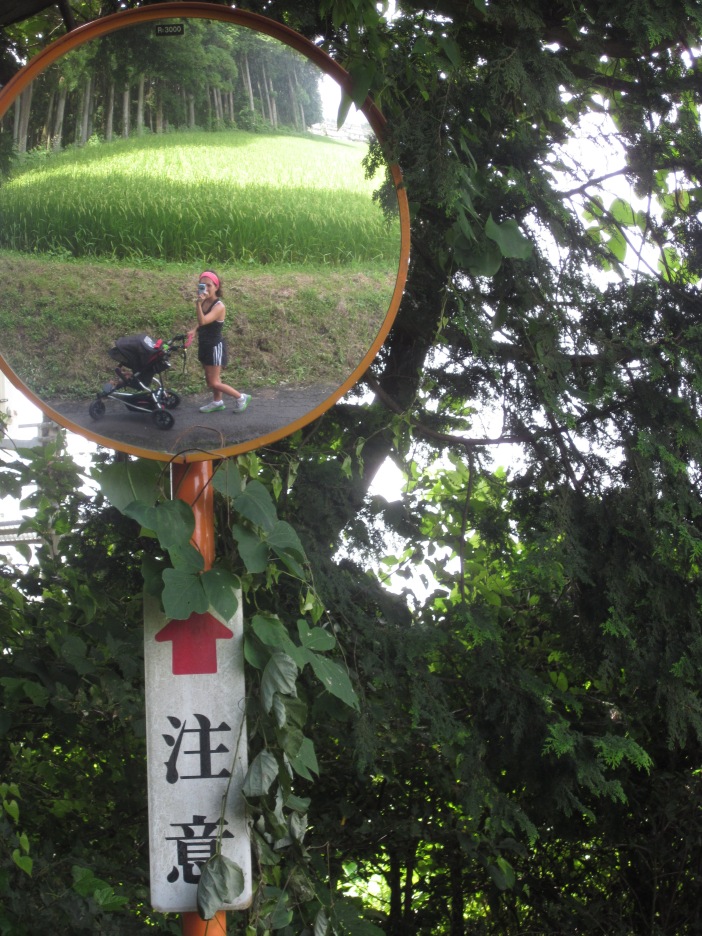 Dave’s gone for almost a week, and usually I’d love to use that as an excuse not to run. I truly do prefer to run alone, it’s an amazing time for thinking and meditating and blasting myself towards early deafness with my iPod. Technically I can run when there isn’t anyone to watch the baby for me, but I don’t do it often. Sure, sure, I spent a lot of time (and money) finding the perfect all-terrain jogger, but actually jogging with it is really HARD you guys! It involves running PLUS pushing a 20 pound stroller with an 18 pound baby inside, leaving only one arm for pumping. Ouch! I mean, I want a workout but good grief!

This week, however, I had to get out of the house. I had to get some endorphins pumping and some blood flowing and burn a little daylight while solo-parenting.

The run lasted 30 minutes, 5 of which weren’t actually spent running. Did you read the bit about how heavy the baby plus stroller is? So give me a break. But we got out there. I narrated the progress of the run to baby.

‘Struggling, baby, give me some words of encouragement!’ (she stayed ominously silent)

‘Water! *sputter sputter cough cough* Hand me that sippy cup!’ (then I proceeded to steal water from my child)

Seriously though, did I tell you guys I live in a rather hilly region of Japan? There are hills. Steep-ish type hills all over the place, my buns were really burning! Next time I’ll bring my own water.

When I began the run, I was faking it. I wanted to be motivated, but I wasn’t. I wanted to be though. I really did. By the 15 minute mark, I was feeling WONDEROUS. The motivation was flowing…well, not like water obviously, but it was plentiful. When the run was over, I was spent. But in that really wonderful amazing way you feel after you just sweat your life away until your ass is burning.

Being alone with a 9 month old for a week is hard. It’s stressful and tiring, even when it’s really fun. Doing it in a place where you don’t know anyone, where you couldn’t even walk up to a stranger and strike up a conversation if you wanted to, is at best a challenge and at worst desperately lonely and exhausting. Part of me wants to just spend every moment as low-key as possible, to stay in a two-block radius, to do absolutely nothing that is in any way tiring. But that part of me is overridden by the part of me that knows that a run in the sun, the sweat and the burn, the fresh air in your lungs doesn’t make you tired, it gives you energy. It helps you sleep better at night and reminds you that you can do this, whatever it is.

I’ll admit it, here and now. Sometimes, despite how wonderful my life is, I want to run from the tougher stuff, take 2 Ambien and snuggle up in a room with black-out shades. But I can’t, so I don’t, and I run towards it instead.

4 thoughts on “Running For It”