In 2000 we had a Japanese exchange student, Tomo. She was such a sweetheart, probably really overwhelmed by the volume of our family dynamic and maybe a little frustrated by my mother’s inability to understand accents (that includes ALL accents, such as those from England or Alabama).

Before she hopped on her return flight to Tokyo, I asked her “What do you like best about the U.S.?” And she said “Everything is SO big in America! The houses, the cars, the food, the PEOPLE!” And the 20lbs she gained during her time in the U.S. was a testament to how well she embraced our lifestyle. Now that I’ve been to Japan and seen the portion sizes myself (check out how teeeeeeensy tiny that cookie is!) I am certain she shed those American pounds soon after she returned home. I, on the other hand, haven’t embraced the tiny portions unless you count eating tons of tiny portions ’embracing’ them.

I have, as you may know, an undying and crippling love of cheese. But cheese isn’t plentiful in Japan (oh Europe, how I miss thee) and it also isn’t cheap. Some kind of supply and demand thing I’m sure. So in the absence of my first love, I am now focused on my second obsession: sweets and treats.

In sharp contrast to their cheese situation, the Japanese have a very well-developed sweet tooth. And I plan to explore all of the offerings one by one.

I started with what I like to call ‘Care Bear cookies’ because look how cute all those little colored bears are!? Also, I had to make something up because I can’t read anything here. At. All.

Each sleeve cost roughly 1USD, a bargain. But which one do you choose? I only had the vague illustrations and the colors of the bears to go by. So I chose the five at random (ok not RANDOM per se, 4 of the 5 appeared chocolate-related so I might have been biased) and set out taste testing. I let Dave help…not because I’m generous but because it was just plain rude not to.

From left to right:

Fuchsia Bear – Some kind of butter cookie, a bit like shortbread. Dave loves it, I felt it would have been improved with ANY kind of chocolate.

Black Bear – Picture a flattened Corn Nut with chocolate chips in it because that’s EXACTLY what this tasted like. Weird, right? Err, I mean, not weird, different.

Chartreuse Bear –  Green tea flavored with little chocolate chips! A delight! After this photo was taken I secretly took that sleeve and put it in the backseat of the car where I then ate them sneakily while Dave drove and I pretended to be entertaining the baby.

Pink Bear – A sandwich of vanilla cookies with chocolate cream! What’s not to love!? I ate the whole sleeve. Right then.

Purple Bear – Have you ever found yourself eating a Fig Newton and thinking ‘this Fig Newton is great, but what if the fig was CHOCOLATE instead?!’ Has no one at Fig Newton headquarters ever thought this? Well if they haven’t, too late, the Japanese beat them to it. 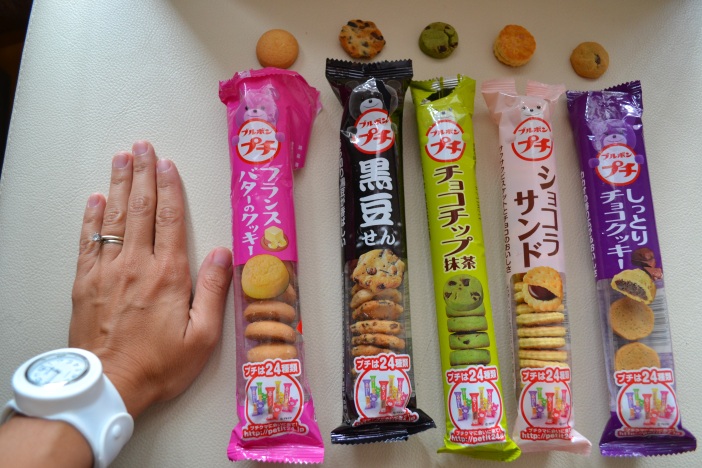