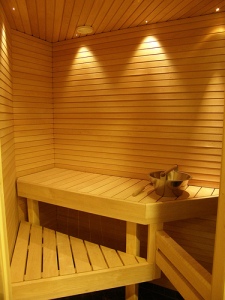 It’s not exactly a new or novel idea to have a sauna at the gym, but using a sauna as part of your health and fitness regime is definitely more common here in Europe. The Finns are known for their saunas, but the Germans and the Dutch take them pretty seriously, too. Last year my favorite part of my workout (besides hanging out with you, Sherry!) was taking a nice long sauna afterwards. I felt like I was glowing (beat red) and tingling (overdid it in Spinning) and I was primed for a nap.

Since I didn’t set foot in our ‘local’ gym (a long, winding, boring drive into another village) until last month I had been sauna-deprived for far too long. I needed to get naked in a room full of naked strangers and sweat profusely. Immediately if not sooner.

Naked, you North Americans say? Naked. Nude. Birthday suit. What’s the big deal you say? We’re all just ladies flopping around with our fun-bags and the region under Terry Town Bridge! No, we’re not all just ladies, not in Europe. Some of us are men, shimmying through the sauna with our man-bits and our hairy backs. Dave and I went to a public sauna of this sort earlier in the season, and we purposely hit it during the low-traffic hours, because let’s be honest…it’s weird to be standing naked in a room with your husband and a smattering of other naked people. Sweating. The sweating somehow makes it much, much stranger.

Don’t get me wrong, I’m all about nudity. I grew up in a nude house with hippie parents and a sister whose favorite outfit was cowboy boots and a tiara (and maybe that still is her favorite outfit, I’ll have to check on that one). I’m not offended or icked out by the nudity of others, and I’m not all that shy of my own nudity. Dave is constantly yelling ‘Shut the blinds! The neighbors can see you nude in our living room!’ or ‘Should you really vacuum/bake/do yoga nude?’ Yes David, I should. I’ll be bold and tell you the truth: I look BETTER nude. Clothes cut me off all wrong and make me feel constricted. Sometimes we walk in the house after a long day out and about, and I gear down right away. It’s freeing.

Anyway, despite my semi-liberal stance on co-ed group nudity, I was glad to see that the gym has a “Frauen” sauna day, meaning only fun-bags and no man-bits. I felt I could be more relaxed and get more out of my day in the sauna in this kind of environment. I sweated and cooled down alternately for an hour, enjoying the nature sounds music being piped into the sauna area. I read (ie: purused the pictures) a German magazine while sitting in the lounge chairs outside the sauna itself, while elderly nude Germans made small talk. I even noticed a small menu card on the table beside me, and a white phone where you can make orders for drinks! How grand!

And while the elderly Germans laid nude and willy nilly on their lounge chairs, I wrapped myself casually in a towel, it’s not a peep show for goodness sake. And I was a bit shocked when the ‘waiter’ who brought the drinks was really the male, 20-something manager of the gym. HELLO!? Is this not Ladies’ Day? Can the ladies working in the gym not bring the drinks you little creep? The elderly Germans didn’t seem to mind, because no one made a move to cover up and small talk was in fact made with said man. My inner social worker couldn’t help tsk-tsking though…what if I had chosen to come to Ladies’ Day because of a previous traumatic incident with men? Zen it out Lane, this is place of relaxation.

I hit the showers and went home.